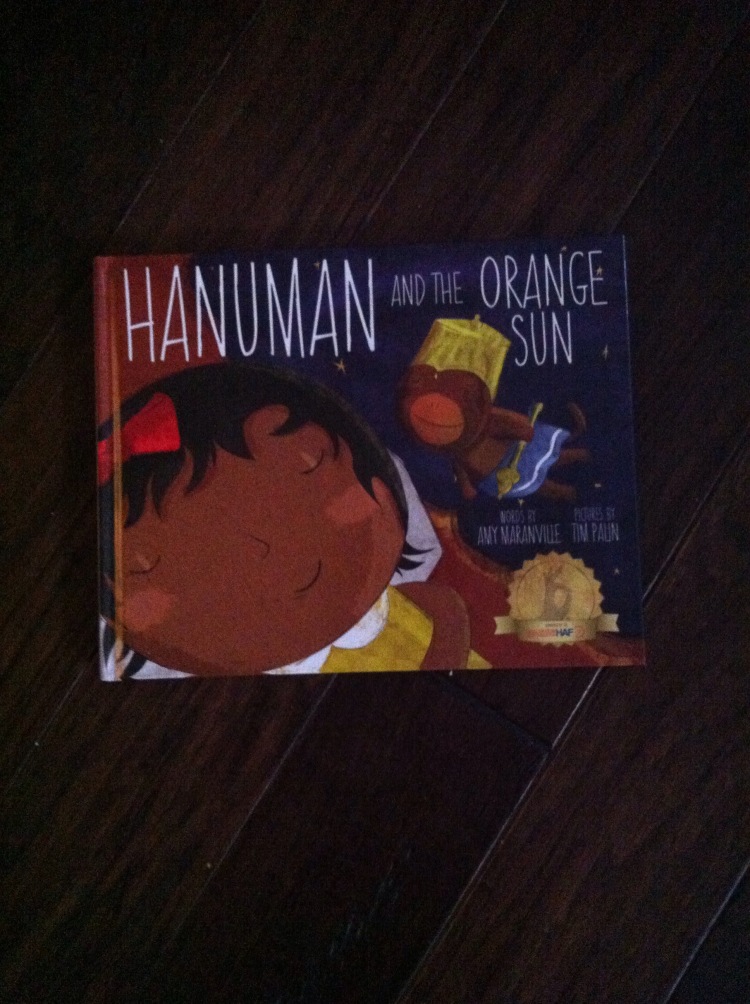 This book arrived in our little library at the right time when grandma is teaching the 3 year old Hanuman Chaleesa. And this book became a great way for a grand parent and a grand daughter to bond over the innumerable stories of Hanuman dada.

Inspired by India and made for little hands this book by Bharat Babies re-tells the story based on an ancient Hindu lore where Hanuman mistakes the sun for a giant orange and gobbles it up.

This story is told to us via Harini’s mother. Harini is a little girl who likes playing in the summer sun just like all children. One day when Harini feels hungry after all the playing she runs to her Mumma who then narrates the story of Hanuman dada and the orange sun.

The author, Amy Maranville keeps it beautifully simple by first telling a child that before Hanuman dada became tall and a strong God he too was just a baby in his crib and one day woke up very hungry. He then looks up at the sky and mistakes the sun for a big juicy orange and eats it up in just one bite.

What follows next is a series of events.

With the sun in Hanuman’s mouth it could not shine down on the Earth and there was darkness all around. The Gods in the sky panicked and called the king of Gods, Indra to bring back the sun. Indra gets angry and lifts his vajra (lighting bolt) and throws it at Hanuman and hurts him. But as Hanuman opens his mouth the sun comes out and shines again. Seeing Hanuman hurt, his father, the Wind God cradles him and gets angry at Indra for hurting his son. And in anger the Wind God declares to stop the wind.

Soon everything comes to a standstill; the birds, the trees, the flowers, the ocean. And the earth becomes desert hot.

Indra soon realises his mistake and brings gifts for Hanuman.

The book ends with a valuable lesson. Think before you act because you are more powerful that you are. And if you put your mind to something you can accomplish anything.

The illustrations by Tim Palin are simple and create a mischievous image of Hanuman dada in the mind.

We are looking forward to more stories told via Harini. If you are keen to read diverse stories to your children, this Indian lore can be a great start.